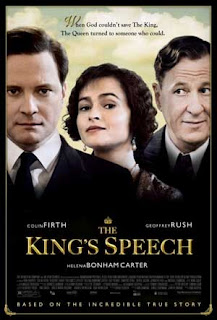 The film shows how the Duke of York (Firth), a shy man afflicted with a dreadful stammer, goes through unorthodox treatment and finally gives a significant speech on BBC radio when he succeeds his father King George V, as King George VI, before World War I.

Its nominations include acting nods for Firth, Rush and Carter as well as for best screenplay, best original score and best director.

Giving a neck-to-neck run to the movie are David Fincher's "The Social Network" and Mark Wahlberg starrer "The Fighter" with six nominations apiece.

The nominees for the best comedy or musical were Tim Burton's "Alice in Wonderland", Christina Aguilera's debut movie "Burlesque", "The Kids Are All Right", Bruce Willis starrer "Red" and Johnny Depp and Angelina Jolie starrer "The Tourist".

Depp has been nominated for two trophies in the best comic actor category, one for his role as the Mad Hatter in Burton's 3D fantasy "Alice in Wonderland" and for his role in "The Tourist".

Other best comic actor nominees are Paul Giamatti for "Barney's Version", Jake Gyllenhaal for "Love and Other Drugs" and Kevin Spacey for "Casino Jack".

The nominees for best actor in a movie drama are Jesse Eisenberg for "The Social Network", Colin Firth for "The King's Speech", James Franco for "127 Hours", Ryan Gosling for "Blue Valentine" and Mark Wahlberg for "The Fighter".

Nominations in the best foreign language film category are "Beautiful (Mexico, Spain), "The Concert" (France), "The Edge" (Russia), "I Am Love" (Italy), and "In a Better World" (Denmark).

The nominees for best animated feature film are "Despicable Me", "How to Train Your Dragon", "The Illusionist", "Tangled" and "Toy Story 3".

The contenders in the 25 categories were announced by actor Josh Duhamel, Katie Holmes and Blair Underwood together with Hollywood Foreign Press Association (HFPA) President Philip Berk at The Beverly Hilton Hotel here.

The 68th Annual Golden Globe Awards will be presented Jan 16, 2011 hosted by Ricky Gervais and will be seen in more than 160 countries.
Posted by Indiblogs at 10:58 AM

Email ThisBlogThis!Share to TwitterShare to FacebookShare to Pinterest
Labels: Hollywood, The King's Speech