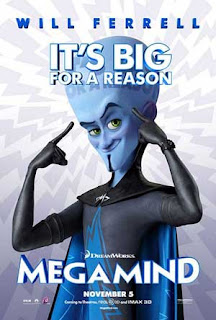 In a year where good to great animation films became the rule rather than an exception, and where one "Despicable Me" redefined our notions of villainy, comes "Megamind" that takes it to a totally different, hilarious and poignant level. What you have here is the wittiest comedy of the year.

The rivalry between Megamind and Metroman is legendary in Metro City. Both alien survivors from other dying planets have different powers. While Metroman has superman like physical powers, Megamind creates gadgets with his mind and help from his minions.

Until one day, Megamind kills Metroman. With no one to stop him, he takes over Metro City but is bored as he no longer has any challenge. Afterall what's a villain without a hero? So, Megamind decides to create a hero so that his life as a super-villain finds purpose again. Only, he ends up creating a truly bad, evil villain. Would Megamind now stoop down to the level of becoming a hero to save Metro City?

Megamind picks up the best elements from many films - most notably "Despicable Me" (story, motivation and cuteness of the super-villain), "Shrek" (spoofing of popular culture), "The Incredibles" and "Superman". With this it creates a truly unique, witty and funny film whose puns and surprises don't cease till the end.

It is good writing, storytelling, direction and animation at its best possible. It's a take on Lacan's theory which talks about the fun of the chase and the end of fun after the desired object is acquired, and makes a fun-filled adventurous ride out of it.

The wit and humour is stuff not of giggles, but uproarious laughter. The spoof on Marlon Brando as Kal-el in Superman takes top prizes in its ensemble of gags and funny lines. The animation work is also spot on. So much so that a discerning eye or multiple visitor to the film will find something every time.

Yet, at the core of it, like "Despicable Me" and like Freud who states what we are today is due to our childhood experiences, questions society that is quick to alienate someone, that turns him first into an asocial and then into an anti-social creature. Yet, behind the charade of super-villainy, there indeed is a little child that is crying to come out. All it needs is a little support. It shouldn't take a Megamind to figure that out.
Posted by Indiblogs at 11:42 AM