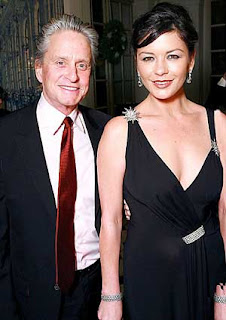 London, Dec 13 (IANS) Cancer-stricken Michael Douglas and his wife Catherine Zeta-Jones have been named the top celebrity couple of 2010.

The "Wall Street" legend dominated headlines in August when he revealed he has been diagnosed with a throat tumour, reports contactmusic.com

In a poll by dating website chemistry.com, Angelina Jolie and Brad Pitt came second, while Demi Moore and Ashton Kutcher rounded out the top three of the list.
Posted by Indiblogs at 11:06 AM