No rift between Rani Mukerjee and Vidya Balan: Director 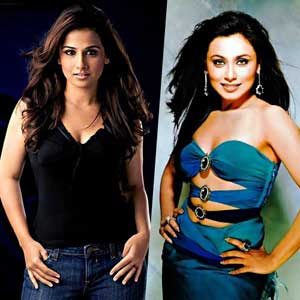 Mumbai, Dec 26 (IANS) Dismissing rumours that the two leading ladies of his forthcoming film "No One Killed Jessica" were at loggerheads, filmmaker Rajkumar Gupta says Rani Mukerji and Vidya Balan share a camaraderie and gel well.

It was reported that Vidya is not very happy with Rani because the Bengali beauty is hogging the limelight and taking maximum space in promotions. But Gupta called all the rumours baseless.

"I have been accompanying Rani and Vidya on most promotional events and they have been having a fabulous time. These are just rumours and there is no truth in these claims," Gupta told IANS.

"I've seen how well they gel and the camaraderie that they share and the positivity with which they shot the film. So these are just rumours and not to be taken seriously," he added.

Gupta, whose first film "Aamir" was a tale of a man's struggle against terrorism, said that when he finished writing "No One Killed Jessica", Rani and Vidya's names instantly came to his mind for the main leads.

"Both are brilliant actors apart from being stars. Vidya has that certain kind of sensibility that was needed for her character. She is very sensitive not only as an actor but as a human being," he said.

"Rani's character required to have a lot of spunk and a headstrong and feisty attitude. I knew Rani will be able to do justice with that," he added.

The film, slated to release Jan 7, is based on the murder of model Jessica Lall in 1999 by Manu Sharma, son of a Haryana politician, and the struggle of her sister Sabrina Lall to get justice for her.

It took the director, who has assisted filmmaker Anurag Kashyap in the past, three months to research about the case and seven months to write the script.

"I took up this subject as I thought it was a very inspiring story where in the course of events an entire nation came together and media played a very important role. I thought this would be an interesting story to portray on celluloid," Gupta said.

However, his road to making this film was not without obstacles. The filmmaker said it was very challenging to give shape to the project.

"At every stage, there were challenges. The writing was the most difficult bit because the canvas was broad, there were so many characters and I didn't want to make a documentary or a biography," Gupta said.

"I wanted to get into the realms of cinema and make it an engaging and entertaining thriller. To get that entire thing in place, it took me some time to figure out and see how to go about it," he said.

"I had to get a balance of fact and fiction because it was a very sensitive issue. So the script also had to be approached with a lot of sensitivity," he added.

But wasn't he scared that the movie might rake up many controversies because of the nature of the subject?

"This factor did come to my mind. So I tried to approach the film with as much sensitivity as possible," the director said.

"But we must also keep in mind that the film is not about naming people or accusing anyone. That's not my job as a filmmaker. It's just my interpretation of the case," he added.

After two serious drama films, Gupta is all set to make a light love story called "Rapchik Romance", which is on the scripting stage at the moment.
Posted by Indiblogs at 10:59 AM