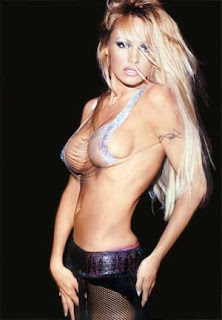 The commercial is the latest to be made by the group People For the Ethical Treatment of Animals (PETA) in their long-running campaign against the use of animal furs and skins in fashion.

In it, the former Baywatch star is seen dressed in a revealing airport security guard uniform stopping people and stripping them of leather belts and shoes and fur coats.

PETA had hoped to place the advert on large-screen televisions throughout Hong Kong International Airport over the peak, year-end holiday period when more than 100,000 people a day pass through the airport.

However, JCDecaux, the company that manages the advertising concession at the airport, rejected the advertisement as inappropriate.

"Given the groping that you see at security checkpoints and the nudity that you see in body scans, we're surprised that our light-hearted ad was deemed too risque, PETA Asia vice president Jason Baker said.

PETA said it hoped to place the ad in Berlin, Tokyo and Sydney and in airports in the US, but Hong Kong had been the first to reject it.

This year, an advertisement featuring longtime PETA supporter Anderson in a bikini with her body marked to show cuts of meats, similar to posters seen in butchers, was banned in Montreal.
Posted by Indiblogs at 10:38 AM