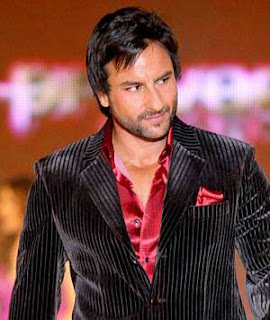 The 40-year-old actor is all set to work with Amitabh in Prakash Jha's next "Aarakshan". This is the second time that both the actors will share screen space after the 2007 film "Eklavya: The Royal Guard"

"I joined films pretty much because of Amitji so it's always an absolute honour to work with him and I'm glad I got another opportunity to get associated with him," Saif told reporters here.

Big B too was elated to know about Saif's thoughts and revealed that he felt honoured after hearing what Saif had to say.

"I have worked with Saif in ‘Eklavya', that was my first association with him. I am really honoured and privileged to know that he feels that I was in someway responsible for his entry into this film industry. I'm delighted to work with him again," said the 68-year-old star.

Amitabh also remembered some of the moments that he spent with Saif.

"Today, I remember one of the very old moments. Saif was six-seven years old and he had visited my sets when I was shooting a song in Filmcity. Sharmila ji, his mother, said that he wanted to be with me and see the shooting.

"He was a very confused looking youngster then, who stood at the top of the hill, sitting on a rock all by himself and watching the shooting. From then on I have watched him grow so brilliantly to a fine actor with a lot of variety in every performance," revealed the actor.

"Aarakshan" also stars Deepika Padukone, Prateik and Manoj Bajpayee and will go on floor Jan 15. It is based on policies of caste based reservations in government jobs and educational institutions.
Posted by Indiblogs at 11:24 AM