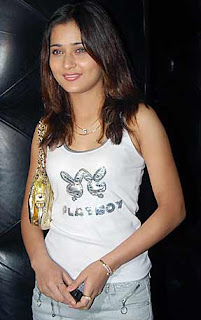 New Delhi, Dec 18 (IANS) After being ousted from reality show "Bigg Boss 4", popular TV actress Sara Khan has bagged the lead role in Zee TV's "Ram Milayee Jodi". She will be replacing Priyal Gor to play Mona in the show.

The grapevine was abuzz that producer Rajita Sharma had been approaching several known faces to replace Priyal due to her alleged difficult attitude. And now she has finally signed on Sara.

Sara, whose claim to fame is Star Plus' "Sapna Babul Ka...Bidaai", is excited about her new venture.

"It's a big opportunity to just come out of the reality show and bag a lead role in a prime-time show. I loved the script and the storyline is at a very interesting juncture," Sara said in a press statement.

"Ram Milayee Jodi" is a love story between Mona, a chirpy girl from a Punjabi family, and a Gujarati boy Anukalp. The show is about the clash of cultures in relationships.
Posted by Indiblogs at 3:41 PM