Singer Rihanna to judge 'The X-factor'? 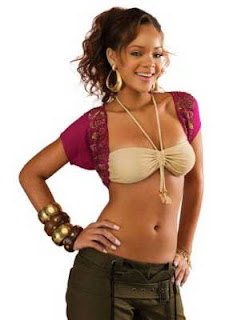 London, Dec 30 (IANS) R&B singer Rihanna has sparked off rumours that she might take the judge's seat in talent hunt show "The X-factor" after she enjoyed a dinner with Simon Cowell.

The 22-year-old singer was back to her native land Barbados to enjoy Christmas with her family, while Cowell was also been enjoying a festive trip to the island.

The pair met for dinner at Barbados' famous Sandy Lane hotel, along with British retail mogul Sir Philip Green. Rihanna revealed about the meeting in a post on microblogging site Twitter.

She wrote: "Just had dinner with Simon Cowell, Philip Green, and Lucian G., and Ashley (thanks) Sandy Lane! Great night!"

The singer has sparked off rumours that she is in negotiations with Cowell for a judging role on the US version of British singing competition "The X Factor", which Cowell will be launching in 2011.
Posted by Indiblogs at 2:50 PM