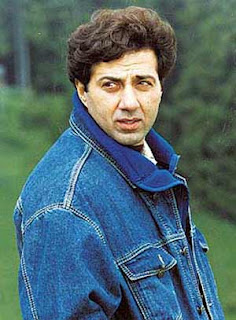 "The characters that we play in this film are not actually how we are in real life. We would never behave like this with our father in real life. I'm shit scared of him. If he is sitting in one room, I'll run to the other. But when we are working, it's a completely different thing altogether because we are those characters," Sunny told IANS in an interview.

He might be scared of Dharmendra, but that doesn't mean he's nervous about sharing screen space with him.

"We all live together. So it suddenly doesn't strike me that he is a big actor, so I'm comfortable working with him. If it was some other actor whom I didn't know so well, I might be nervous, but not here," said Sunny.

And even though he's been in the industry for almost three decades, the actor still values his father's inputs.

"My dad's inputs have never had anything to do with a story, it's always been like don't do a film which is rubbish just for the sake of it. Only do a film if you like it and are sure of it. So, that way, he has always been guiding us, but he wants us to learn from our own mistakes and I think that's how it should be," he said.

The three Deols had come together in "Apne" as well, but Sunny promises that "Yamla Pagla Deewana" will be different and more entertaining.

" 'Apne' was an emotional film about family bonds where people were crying. So we had decided that the next film we do together will be a full-on entertainer," he said.

The actor, who has given hits like "Damini", "Chaalbaaz" and "Gadar", is happy that their latest venture is creating just the right buzz before its release.

"This is a film that we have been really working hard on and we had a tough time while getting it made. But when we saw the response of the audience once the trailers were out Nov 5, it was great. Looking at people's reaction it seems that the film is already a hit; so it's very scary, but at the same time we are loving the whole feel."

But doesn't that put you under a lot of pressure?

"Pressure is definitely there, but whatever we had to do we have already done; we can't change it now. So it's just waiting and watching now. We have looked into every detail. It's not just a film of gags, it's a story and I'm very positive and sure of the film," he replied.

Elaborating on his role in the film, Sunny said: "I play a Sikh, who is a NRI, living in Vancouver with his wife, mother and two kids and is a recovery agent. One day he comes to know that his brother and father, who had got lost, are in Benares (Varanasi). The film is about this character's journey to Benares and the whirlpool of events that follow."

Sunny hasn't done too many comedies, but he says he doesn't have to put in too much effort into them. But what he always found a little tough was dancing.

Tagged as an action star for a long time with films like "Arjun", "Ghayal" and "Ghatak", does he plan to return to action any time now?

"I'm working on a few projects because I know that my fans love me in action roles and I have deprived them for a long time...So I'm going through a script...Will announce it this year itself," Sunny said.
Posted by Indiblogs at 10:21 AM