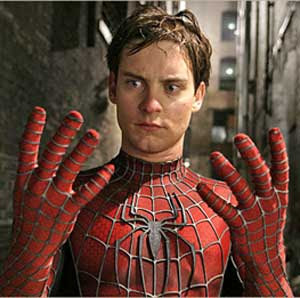 The British actor, who is taking on the titular role and his alter ego Peter Parker in the next movie in the franchise, was relieved to get the backing of the American star, who played the character in the last three films in the series, reports contactmusic.com.

Garfield said: "Tobey sent me a lovely message through a mutual friend. He gave me his support, and it meant a great deal, of course, because part of the reason I love and have continued to love this character was because of his portrayal."

"To step into those shoes is no mean feat. It was generous of him to reach out and say something, so I'm thankful," he added.

Garfield is enjoying filming the movie, being shot in 3-D, alongside Emma Stone but admits it is harder work than he expected.

"It's wonderful in theory, isn't it? You kind of go, 'Well, this is going to be great.' But then, of course, in practice, it's obviously a great deal of hard work and a great deal of pressure, but wonderful. It's incredible," he said.

Marc Webb is directing the movie, which is scheduled for release in 2012.
Posted by Indiblogs at 10:46 AM