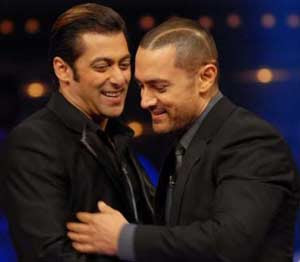 New Delhi, Jan 3 (IANS) It seems Aamir Khan is quite fascinated with the idea of using fellow actor Salman Khan's style statements in his productions. Keeping up the trend, the Bollywood perfectionist has made visible references to the star in his upcoming movie "Dhobi Ghat".

It's believed that the hit song "Pappu can't dance saala" in Aamir's 2008 hit production "Jaane Tu...Ya Jaane Na" was a dig at Salman and his lifestyle. Then Aamir's small-budget satirical hit "Peepli Live" last year had an actor sporting the star's trademark bracelet with blue stone.

"Prateik Babbar's character in 'Dhobi Ghat' is shown to be a Salman Khan fan. Prateik is seen wearing the famous Salman Khan bracelet. He loves working out to build a body like Salman's and he wants to become an actor like him," read a statement from the film's publicist.

"Prateik's character hails from a different city and is a part-time dhobi, and a wannabe actor. He is into body-building and thinks Salman is a cool dude."

Also starring Aamir, Monica Dogra, Kriti Malhotra, Kitu Gidwani and Nafisa Khan, the movie revolves around four characters from different classes of society and how their lives are intertwined with each other.
Posted by Indiblogs at 12:31 PM