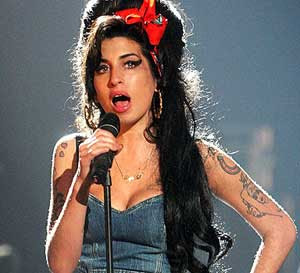 London, Jan 7 (IANS) Singer Amy Winehouse is gearing up for her comeback as she will be performing new songs during her live concerts in Brazil starting Saturday.

The 27-year-old has rarely performed live and never with a full backing since 2008, so fans are hoping this "one off" tour is a sign she is ready to make a comeback, reports contactmusic.com.

In the last two years, Winehouse has been battling drug addiction and shared a complicated relationship with ex-husband Blake Fielder Civil, but now she is said to be trying to curb her partying lifestyle and focus on her singing career.

The "Rehab" singer will perform at Rio De Janeiro and Sao Paulo and singer Zalon, who is working with Winehouse and her band, has promised fans can expect to hear new songs at the concerts.
Posted by Indiblogs at 10:26 AM