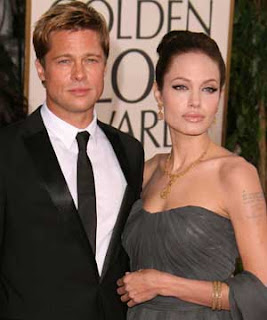 London, Jan 2 (IANS) Superstar couple Brad Pitt and Angelina Jolie have made a brief visit to a children's cancer centre.

"They stayed about 45 minutes. It was a very nice visit," femalefirst.co.uk quoted hospital's spokesperson Cora Scott as saying.

Last year, Pitt and Jolie, along with family, donated $1 million to St. John's Foundation for Community Health and had the paediatric cancer unit dedicated to the Pitt's mother Jane.

"Jane Pitt is a gem in our community. She's a very wonderful woman who cares so very much about the well being of children," Scott added.
Posted by Indiblogs at 11:14 AM