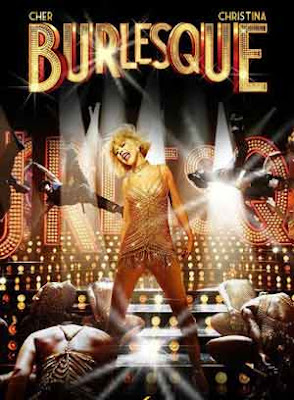 Much like the 'nautanki' in India, burlesque was a form of fun music, dance and comedy that kept America entertained from the mid 19th century to the 1960s. The film, that takes its name from this form does just that, without being serious about itself.

Aspiring to become a dancer, Ali (Christina Aguilera) leaves her small town and moves to Los Angeles. There she finds the club 'Burlesque' owned by Tess (Cher) and is mesmerized. She wants to dance there, but not getting the chance, she takes the job of a waitress with the help of Jack (Cam Gigandet), while also living with him, but platonically.

The club has dwindling business, and only a miracle will save it from being taken away by the bank to which it owns money. Even Ali does not know that she is that miracle.

At the onset, it has to be observed that "Burlesque" is no "Moulin Rouge", for it does not have that grand sweep of love and neither is it anywhere close to the stunning cabaret with its grand sweep of history. Instead, "Burlesque" is an ordinary film of our time about a girl's aspiration of becoming a star. And it is about nail polish, lipstick and shoes.

Yet, the film is entertaining enough for the general audience. It is quick and witty, with snappy dialogues. The songs are foot tapping, and that's the least to expect from a musical. Cher is often too busy trying to ensure her face does not show too much of her wrinkles. Christina Aguilera is surprisingly good in her debut. Stanley Tucci keeps the humour going in his imitable way.

Burlesque as a form is old and exists only as a novelty, rather than a commonality that it was. And so is the tradition of spoofing and humour that was a part of it. The film seems to make an appeal towards helping the old survive, while taking in the new. This is epitomized by Cher, the old star, versus Christina, the current one.

The music, in the beginning, is old. As it progresses though, it gets a touch of the new till in the end, it blooms like a full moon.

Yet, what the film lacks mostly has a grand intention. It aims not for the stars, but for the next rooftop and manages to get there. And that does indeed seem like a waste, considering it has an ensemble of talented actors and dancers.

But in its predictability and cliche, is the comfort of the known which can be either lilting or entertaining, depending on one's preference.
Posted by Indiblogs at 11:53 AM