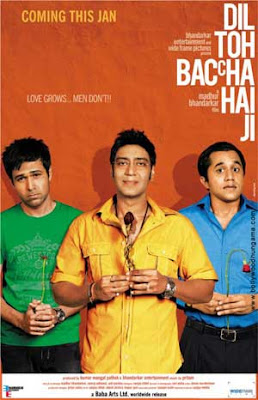 Ummm….Picture to achcha hai jee. Disregarding the rather strenuously upbeat ending "Dil Toh Bachcha Hai Ji" (DTBHJ) turns out to be quite a charming and clever concoction. Though this time Madhur Bhandarkar, one of the strongest celluloid creators of contemporary times, veers into virgin territory, the trademark Bhandarkar touches, like the almost-incestuous use of sex as a bartering point between the sexes, are evident everywhere in this multi-plot story of love, sex and betrayal during times of laughter music and backchat in Mumbai.

The writing (by Bhandarkar, Anil Pandey and Neeraj Udwani) weaves skillfully through the hearts and conscience of our three heroes who are designed to be a study in contrasts and yet so believable, you can touch their lives by just watching them stumble, fall and redeem themselves in tentative, sometimes funny, sometimes moving ways.

This, then, is the story of three house-mates wading through the concrete jungle of Mumbai in search of love, sex and, yes, a sense of belonging. Their houses, hearts and environment look believable. They are shot to resonate reality.

Though projected outwardly as a comedy, DTBHJ has deeper, darker resonances that we cannot miss even if we are too busy laughing at the protagonists' clumsy attempts to get lucky in love.

Bhandarkar's narration communicates that sense of empty enjoyment that you can feel under all the glitz and noise of Mumbai's racing pulse. Omi Vaidya, who plays the most idealistic love-seeker of the triumvirate, says to the go-getting struggler from Mumbai(Shraddha Das) at a pub, "How can people talk in here?" She of course doesn't hear him. She's lost in the pursuit of her wanna-shine dreams that take her further and further out of reach of true love.

Vaidya is in splendid form here, far more in control of his character's destiny than in "3 Idiots". In the way he hybridizes his yankee accent with Marathi and a sense of earnestness with a subtle tone of mischief, Vaidya is absolutely endearing. So is Emran Hashmi. Playing the character with the steepest graph, Hashmi goes from Tisca Arora's toyboy to the new-age Devdas rejected in love by the savvy NRI chick who has social conscience and a practical attitude to men.

When Shruti Haasan (looking so lovely you know she's found her metier in Hindi films) turns around and tells the philanderer, "Yeah, so we slept together. So what? It wasn't your first time nor mine," you know that Bhandarkar has not abandoned his scathing and savage exploration of urban values which made his heroine-centric dramas from "Chandni Bar" to "Fashion" so unforgettable. He's only added laughter to his cinema.

In DTBHJ, Bhandarkar walks a tightrope. He has to balance the laughter with the dark underbelly of Mumbai's beautiful, but alas, desolate people. Besides the powerful writing (Sanjay Chel's dialogues are tongue-in-cheek and sometimes killing in their effectual demolition of the sacred cows of urban conduct) and razor-sharp characterization (barring the caricatural people in Devgn's office), the film gets high marks for dead-on casting.

Every actor breathes life into the constantly mutating comedy. If we care for all the three love stories that run in criss (never crass) cross it is because the actors enacting the love relationships go beyond their own personalities in search of the people they play. While Omi Vaidya and Emran Hashmi make a great impact, it is Ajay Devgn, echoing Amol Palekar's Common Man from the 1970s, who must be congratulated in the loudest voice for abandoning his 6-pack mean-mirth-machine image to play a mousy middle-aged divorcee with the hots for his comely secretary.

Among the female cast, Shazahn Padamsee is extremely easy on the eyes and fits her bubbly ingenue's part like a chic glove. Tisca Arora as the bored socialite who strays into a lust liaison with an ever-ready glorified gigolo, lends a certain weight to the proceedings with her fiery eyes.

DTBHJ is a true-blue sex comedy that doesn't lapse into unnecessary passages of vulgarity and innuendos. Though Bhandarkar has sought inspiration from the romantic comedies by Hrishikesh Mukherjee and Basu Chatterjee, the style of storytelling and the tantalizing merger of libido and urban morality would have flummoxed those wondrous comedy makers.

Times have changed. So have the films. Thankfully we still have filmmakers who believe the story is the hero. This is the world of Bhandarkar's "Page 3" coming together with the laughter of Blake Edwards' rom-coms.

A must-see film with enough meat in the plot to keep us engaged till the end. And three heroes who never take off their shirts even when they are sweating in nervous anxiety.

Love is like that only.
Posted by Indiblogs at 11:47 AM