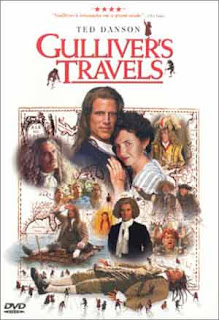 It is one of the greatest satires of all times that "Gulliver's Travels" has been relegated to children's literature. That the latest filmed version of the same treats the masterpiece with similar disdain is but a satire on humanity itself, which ironically writer Jonathan Swift repeatedly indulged with in the book.

Lemuel Gulliver (Jack Black), a delivery boy, is one of the little people in his office and cannot express his true feelings for travel editor Darcy (Amanda Peet). After being fired, he fakes being a travel writer and takes up an assignment to explore Bermuda triangle. There, he disappears, only to wake up in Lilliput, the land of the small people who see him as a beast at first, but he manages to win them over in the end, while also uniting a commoner in the land with the princess.

There is a hint of a soul in the film with delivery boy Gulliver being the little, insignificant person in a big office and then the low caste Lilliputian Horatio (Jason Segel) aspiring for the higher class princess Mary (Emily Blunt).

But when you consider the actual analogy of the original book, where the warring Lilliputians and Blefuscu were intended by Swift as criticism of modern society, this falls flat.

Quite contrary to the original satire, the film actually seems to endorse modern life with all its faults, as Gulliver turns Lilliput into mini-Manhattan. This and the parody of Hollywood is not done with any higher intention but cheap thrills. Sadly, these barely raise a chuckle.

The film thus ends up as nothing but a show of special effects for little children who incidentally have seen better effects in far superior films.

Also the introduction of the big people near the end (Brobdingnag in the original story) is out of place, and gimmicky. It could have waited for a sequel. Perhaps the makers had the correct premonition that the film won't survive to have a sequel, so they had to cram all in one.

Even the little emotions and build up of mood that could have helped audiences connect with it are rushed up as if the makers were in a hurry to finish the film.

Jack Black is himself in the film, indulgent and loony, which may or may not suit the story depending on your take on both the film and Jack. Director Rob Letterman, who has given two decent animation films "Shark Tale" and "Monsters Vs. Aliens", fails miserably with this one.

Unlike the original book, which is a parody of modern life, the film self-cannibalizes, ending up becoming a ludicrous parody of itself to be watched only if there's nothing else to do.
Posted by Indiblogs at 11:26 AM