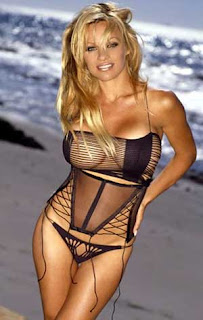 London, Jan 1 (IANS) "Baywatch" beauty Pamela Anderson has been named the person of the year by People for the Ethical Treatment of Animals (PETA) for her tireless work to end animal cruelty.

"For years, Anderson has been penning letters and posing in ads for PETA UK's American affiliate in order to raise awareness about cruelty to animals and demonstrate how easy it is to avoid contributing to animal suffering," dailystar.co.uk quoted a spokesperson as saying.

The organisation Friday recognised Anderson for helping to draw attention to animal rights issues by speaking to students at Oxford University, posing for pictures with her body 'painted in butcher markings', doing commercials for the anti-fur campaign and calling on Indian leaders to ban the country's leather trade.
Posted by Indiblogs at 11:23 AM