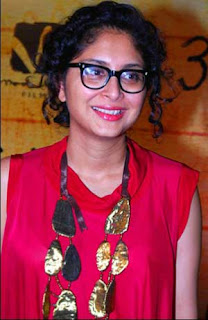 Mumbai, Jan 3 (IANS) Unlike other star wives, Kiran Rao - the better half of superstar Aamir Khan - uses her maiden surname and says that the thought of changing her surname to Khan never occurred to her or to Aamir.

"I've grown with my name and have had it for so many years. I have always wondered how people change their names. I'm quite comfortable with Rao and even Aamir is, he never asked me to change my surname," Kiran told reporters here

"I don't mind calling myself Mrs. Khan but its definitely nicer to be called what I have been referred to for all these years," she added.

Kiran, who was at an event to launch a new promo of her forthcoming directorial debut "Dhobi Ghat", also revealed that she is a fan of Salman Khan and initially had wanted a special appearance by the actor in her film.

"In the film, Prateik's character is someone who wants to be an actor and is a huge fan of Salman Khan, so initially when I was writing the film, I had thought I'll ask Salman to make a guest appearance but then that part didn't fit in the film at all, so we dropped it.

"I myself like Salman a lot and this is my tribute to him. Since we have shown that Prateik's character has his (Salman's) posters in his room and wears a bracelet which is quite similar to the one Slaman wears in real life," she said.

"Dhobi Ghat", slated for a Dec 21 release, also stars Aamir and is the story of four individuals and how their lives are intertwined with each other.
Posted by Indiblogs at 12:18 PM