'Life As We Know It' Movie Review 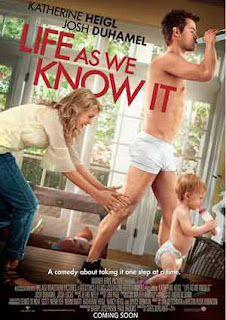 If you consider the title of this rom-com, the least you'd imagine it to be a slice of life. Sadly, despite a few funny moments, it's far from it.

Holly (Katherine Heigl) and Eric (Josh Duhamel), best friends of Peter (Hayes MacArthur) and Allison (Christina Hendrick), can't stand each other. Trouble begins when Peter and Allison die in an accident and leave their infant child Sophie in their joint custody and care.

Not wanting to give the child of their best friends away to social welfare, they try burying their differences to raise the infant. But the double whammy of their absolute incompatibility with each other and the inexperience of raising a child would prove to be the greatest challenge of their life. Somewhere in between, love will smile upon them.

The film begins shakily, and far from raising a laugh, actually seems disjointed. However, once it gets going it becomes a comfortable ride, yet not a ride that is unexpected anywhere or funny.

The chemistry between Heigl and Duhamel is decent, but it is the script that lets them down. The film fails in its attempts to merge two sub-genres - that of opposites repel then attract and bringing up a baby. There already have been enough movies on both that there's hardly anything original left to do here.

Yet, the film does have its few funny moments, mostly raised by the antics of the baby Sophie, played delightfully by triplets, Alexis, Brynn and Brooke Clagett. The triplets are the delightful casting coup of the film.

Katherine Heigl, who has emerged the latest rom-com girl after a string of romantic films like "The Ugly Truth", "27 Dresses" and "Knocked Up", plays her usual do-gooder, the Betty type girl from Archies comics.

The other problem with the film is that it is at least half an hour too long for the attention span of an average Indian viewer. In the end though, more than the length, it is the banality of gags that have all been used before in other films that truly does the film in.
Posted by Indiblogs at 10:35 AM