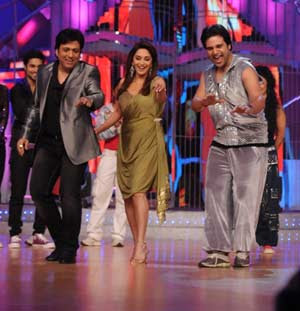 New Delhi, Jan 7 (IANS) Dancing diva Madhuri Dixit and comedy king Govinda relived their more than a decade-old memories as they danced together to their popular number "Makhna" for an episode of reality show "Jhalak Dikhhla Jaa 4".

The song from the 1998 film "Bade Miyan Chote Miyan" became a chartbuster for its peppy tune and catchy dance steps by megastar Amitabh Bachchan, Govinda and Madhuri. So, the two actors didn't miss the chance to dance to the song again when they met on the sets of "Jhalak Dikhhla Jaa 4".

While Madhuri is a judge on the show, Govinda came to support his nephew Krushna Abhishek, a participant in the dance competition.

It was at Krushna's behest that Madhuri and Govinda took to the dance floor on the song, said a source.

The episode will be on air on Sony Entertainment Television Monday.
Posted by Indiblogs at 10:46 AM