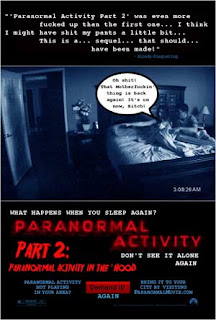 The second part tells the story of Katie's (Katie Featherston) sister Kristi (Sprague Grayden), who is facing a similar kind of unexplainable ghostly activity in her house occupied by her husband Daniel (Brian Boland), step daughter Ali (Molly Ephraim) and infant son. Ali is one of the first ones to personally experience it. But her pleas fall on deaf ears of her father, safe as they feel in the knowledge that the entire house is rigged with cameras.

The daughter meanwhile finds out more and discovers, tackily through research on the internet, that the paranormal activity is because someone in the family had sold his soul to the devil for riches, on the condition that the first born male child in the family would be given to him. Sadly, in almost a century, her step brother was the first male born in the family.

The success of the first part, despite no external sound or effects, was because of one word - anticipation. The film had built up the ante with stillness punctured by gentle unexplainable activities, till the grand finale shook everyone.

This part follows this well and does raise a few chills in the minds of the audience through the steady shots of the house. However, for those who have seen the first, there is nothing new here. Also, the tacky way in which the explanation of the horrors is given leaves a lot to be desired.

Yet, at the root of both the "Blair Witch Project" films and the two "Paranormal Activity" films, are the simplest and the most identifiable of human emotion -- raw fear. It is refreshing to see once again that a film does not rely on cheap gore and blood to scare audiences, boding well for cinema in general.

Filmmakers should thus take a cue from both the series, and pay more emphasis on a good story and their own skills, rather than effects. And if nothing than for that reason alone, "Paranormal Activity 2" is a must watch.
Posted by Indiblogs at 11:36 AM