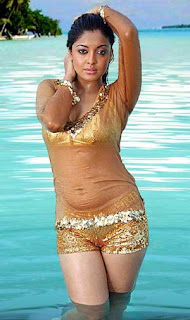 Kolkata, Jan 2 (IANS) Bollywood bombshell Tanushree Dutta feels that actresses are asked to shed inhibitions in front of the camera mainly to cater to the public demand and not because the script demands it.

"Actually, when people come to you with the line that shedding of inhibitions is the demand of a particular screen role, they are actually pandering to the public demand. Words like demand of the role or the character are all trash," Tanushree told IANS in an interview.

Asked whether she is ready to shed clothes if the character required that, Dutta said: "In Bollywood, people have been making movies for more than half a century and they are made in such a way that you need not shed off all your inhibitions. I would really draw the line. I am no more a newcomer in Bollywood."

Tanushree had won the Femina Miss India Universe title in 2004, and made her entry into Bollywood in 2005 with the hit film "Aashiq Banaya Aapne". She starred in "Chocolate: Deep Dark Secrets" the same year, and came to be considered one of tinsel town's dark horses.

But she failed to live up to the initial expectations of her fans as most of her films except "Dhol" and "Bhagam Bhag" bombed at the box office.

Asked about the fate of most of her films, the former beauty queen said: "To what extent a film works is beyond me. My first film 'Aashiq Banaya Aapne' did wonders at the box office. Then 'Chocolate' was also quite popular, but it didn't have the same effect as the first one.

"I just look at my work and of course it's my responsibility to sign good films so as to make sure that people come to watch. But sometimes there are lots of things which are not in our hands. I always try to do the best I can. Some movies work, some movies don't," said the 26-year-old actor.

spending more than five years in Bollywood, and with an experience of working in nearly 12 Hindi and Telugu films, Tanushree now wants to do something different.

"At this point of time I really want to do a historical movie. May be it's going to take some time. I have covered various genres. I have done romantic, psycho-thriller, thriller, crime based, comedy, romantic comedy. Now I want to do a periodical. I also want to do a musical film," she said.

Tanushree nurtures a dream of working on a hardcore subject and literature-based Bengali film in the coming years, but says that she hasn't got an impressive offer yet.

"I have always wanted to work in a Bengali film. But till date I haven't got that kind of offer that would impress me.

"Bengali filmmakers have come up with subjects that are so touchy and hardcore. Literature- and sahitya-based movies are made here. I want to work in literature-based movies in Bengal as this is the specialty of the Bengali film industry," said Tanushree, who has completed a month-long acting workshop in the US.

Tanushree said she wants to sign movies, but she doesn't have the "psychology" of having back-to-back releases in a short span.