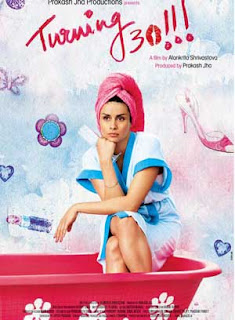 New Delhi, Jan 11 (IANS) Aging skin, fading glow, white streaks in the hair and uncertainty - audiences will get to taste a slice of life in "Turning 30!!!" that talks about women either hitting a subconscious halt or turning a new leaf at the milestone age.

Produced by Prakash Jha, the light-hearted outing is the directorial debut of Alankita Srivastav, who has been a long-time assistant to Jha.

With former beauty queen Gul Panag in the lead, the young urban woman-centric love story also features Purab Kohli in a pivotal role. Made at a budget of Rs.3.5 crore, the film will hit over 125 screens Friday.

Dharmendra and his sons Sunny and Bobby Deol-starrer "Yamla Pagla Deewana" is also releasing the same day, but the first time director has no apprehensions.

"Not at all! I love Dharampaji. In fact we are all going to watch 'Yamla Pagla Deewana' together with 'Turning 30!!!'," Alankrita told IANS over the phone from Mumbai.

Set in Mumbai, the movie revolves around Naina (Gul) who, in the face of her 30th birthday, grapples with a heartbreak and a crisis in her advertising career. A hilarious and heart-warming journey of a young woman who is blossoming into a woman of substance, the movie then deals with the hurdles in her life and how she overcomes them as a mature person.

Gul, who herself touched the 30-mark last year, says apart from the physical changes that one experiences, a lot of self-assessment starts poking women in the head at that age.

"The skin starts showing its age, the glow might start fading, the tightness and firmness on the skin starts to feel the change. Expectations begin to hover in a self-assessment procedure and also by your near and dear ones," she said.

"But the people who are stable in their lives don't really realise much of these things. But the ones who haven't been able to establish themselves go through this phase more than the others," she added.

Having already generated some buzz courtesy its slick trailer and a different subject, the movie is expected to receive niche footfalls.

"Usually people in rural settings are settled in their lives with their family and work and just have an aim to earn more and live a happy life. But in urban settings, we are so disorganised. Women are not married, might be unemployed, they have no permanent accommodation at times and, on top of it, the physical changes start worrying you....so it is something to be anxious about," said Alankrita.
Posted by Indiblogs at 12:08 PM