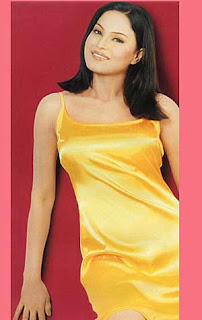 New Delhi, Dec 31 (IANS) Pakistani actress Meera is not happy with the way her fellow actress Veena Malik conducted herself on Colors' reality show "Bigg Boss 4" and accuses her of portraying Pakistani women in poor light.

"Veena Malik is acting very cheap. The way she presented herself in front of Indian audiences is not right. She is denigrating the image of Pakistani women. This is not how women in Pakistan are," Meera, who is in India to shoot for diector Faizal Khan's Hindi movie "Om Allah", told IANS in an interview.

Her liplocking courted controversy after people in Pakistan raised objections and she was apparently fined for this. But right now she feels Veena has crossed all limits.

"If you come over to Pakistan, you will see how sensible and how cultured Pakistani women are. They respect their family values and are not how Veena has portrayed herself," said the actress who herself became controversial after her kissing scene with with Ashmit Patel in her Bollywood debut "Nazar".

Veena came into limelight after her name popped up in match-fixing allegations against Pakistani cricketer Mohammad Asif. She was the cricketer's girlfriend. She then entered the "Bigg Boss" house and her intimacy with Bollywood actor Ashmit Patel caused quite a stir, sending the TRPs soaring.

"She's doing all this because she is hungry for fame. She has no self-respect and is ready to do anything to become famous," Meera said.

"She's like that even in Pakistan. She tries to copy everyone. She can never be her own self. This is not the right thing to do as there are many other nice ways to become famous. Why stoop down to cheap tactics," she asked.

Meera claims she was also approached to be a part of "Bigg Boss" twice, but she refused it.

"I was approached to be the part of the show before and even for this season but when I came to know that Veena will also be a part of it, I refused," she said.

After "Nazar", Meera featured in another Bollywood moive "Kasak" with Lucky Ali.

After doing "Kasak" in 2005, this is Meera's first Bollywood movie in five years.

"After 'Kasak', I went back to Pakistan. Later my parents did not allow me to act here as I was too young and they thought I might just fall for someone here (India) and get settled permanently," she said.

"Moreover, the tension between India and Pakistan also kept me away. But now I am back and hope to sign more Bollywood projects," she said.

Back home, Meera has been actively involved in charity work and has been working with former cricketer Imran Khan to raise funds for Pakistan's flood-affected victims.

"We would like to rope in Rani Mukerji for helping us to raise funds for the flood-affected victims in Pakistan. I plan to meet her during my trip here," she said.

She has also expressed a desire to do charity work with Salman Khan and his Being Human organisation.
Posted by Indiblogs at 11:03 AM