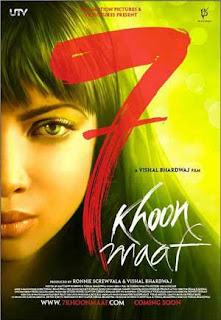 Chalk up an absolute winner for the Vishal Bhardwaj-Priyanka Chopra team. They make a coherent vision out of an inconceivable marital crises.

How do you make sense of a woman who's an incorrigible potentially-loathsome serial spouse-killer who when challenged about her weird passion for changing husbands by divine decree rather than the law of the land, turns around and says, "This heart of mine, it's to blame." Wicked laughter follows. And dammit, we are amused!

How does one make head or 'tale' of such a woman? Well, the first thing a director with a canny sense and sensibility does is sign Priyanka Chopra to play the wretchedly unfulfilled, genetically incomplete woman, a living, throbbing warning against the institution of marriage!

Priyanka, not for the first time, proves she is leagues ahead of all competition. She approaches this strange and sensual creature of the night from the outside and then quietly makes inroads into the woman's heart and soul. We can actually see the character's snarled inner-world on Priyanka's face! We don't even know when and how she does it. Priyanka is that kind of a player.

Vishal Bharadwaj has earlier made films about gangs and gangsterism. Every time the dark brooding atmospheric surface seemed to suggest a life of sinister suppressions. Those unspoken, intangible thoughts and visions that often guide a human being to his or her doom are outlined in "7 Khoon Maaf" with supreme poetic elegance.

This is Bhardwaj's most fluidly-narrated film to date. Of course, having Gulzar on board helps. He pens Urdu poetry for Irrfan Khan and rock poetry for John Abraham. For Priyanka poetry is not needed. She creates a kind of indecipherable poetic statement for her deeply dysfunctional character who kills 6 husbands and moves to the 7th at the end of the film with the profound satirical grief of a woman who has discovered that this world has no true love to offer her.

True love...ah! Now that's an idea. At heart Vishal's dark elegiac film is about the search for true love. The relationship that Sussanna (Priyanka) forms with a young boy(Vivaan Shah) as she goes from one husband to another remains at the core of the film. In a macabre subversion of the almost-pure love that Susanna shares with Vivaan's character, at one point in the narration she tries to seduce the boy who's almost like a son. It's a dark ugly moment, almost repugnant in its incestuous resonances but in keeping with the character's insatiable appetite for destruction.

Vishal Bhardwaj brings to the storyboard a deep sense of tragic grandeur even as Susanna slips from self-gratification to delusional spirituality.

Priyanka Chopra has already proved herself way ahead of her contemporaries in her earlier works notably "Fashion" and "What's Your Raashee". In "7 Khoon Maaf" she moves to another level, displaying a range of emotions and age-changes (minus prosthetics) that one last saw in Shabana Azmi's performances.

Priyanka's sequences with Irrfan Khan (playing a gentle poet who transforms into a sexual pervert in bed) are stuff poetic nightmares are made of. We can clearly see the cinematographer (Ranjan Palit) is not in love with the actress, but the character. His camera searches for intransigent images in Susanna's life, even as Priyanka's quest for the character's core takes her into areas of self-expression that are far beyond the reach of cinema acting as we know it.

A. Sreekar Prasad edits the life of Susanna with a surety that, alas,the character never comes close to achieving in her dealings with the opposite sex. Sreekar creates a symphonic seamless movement from one husband to another, sometimes joining segments in Susanna's life with visuals that would otherwise seem incompatible.

The husbands are all played by actors who have no qualms in stripping away their vanity to become the kind of suave but duplicitous untrustworthy spouses who cheat and betray for the sake of the opposite emotion to love. Irrfan Khan as a wolf in poet's clothing, Naseeruddin Shah as the affable old Bengali dietician (his Bengali accent is more dead-on than any true-blue Bengalis) and John Abraham as a stereotypical rock musician gone to poppy-seed, are pitch-perfect in their creating a drama of the callous for Priyanka's character.

But it's Neil Nitin Mukesh as her first legless army-man husband whose display of clenched menace jolts you.

As a storyteller Vishal Bhardwaj has never been more in command of his language. He punctuates Susanna's story with bouts of unexpected humour and poetry. Providentially the murders are committed in ways that appear more humorous than savage. And that's both a good and a bad thing.

The narrative shows a rare understanding of the gender dynamics and the sexual tensions between men and women. Priyanka Chopra's interaction with the unctuous and closet-horny police officer Anu Kapoor delectably illustrates the fable of the Temptress & The Besotted. And by the way Viagara never seemed funnier.

Priyanka Chopra goes from husband-to-husband with a mocking sigh of resigned surrender. She is not a victim. But neither is she the hero of the bizarre web of destruction and delusion that her character weaves around her.
Posted by Indiblogs at 11:59 AM