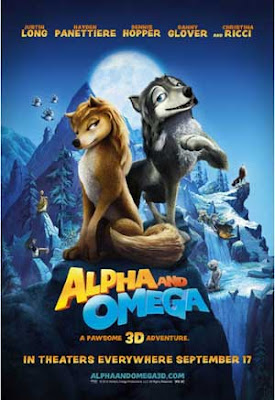 If you are an Indian audience, the best part of the 3D film "Alpha Omega" begins a minute after the final credits have started rolling. Hundreds of Indian names clog up the credits enough for you to wonder if you have seen an Indian film made in Hollywood.

And indeed "Alpha Omega" does seem like a typical Bollywood love story.

Two warring clans of wolves in Jasper Nation Park want to end the war and unite each other by marrying Kate and Garth. But Humphrey, who belongs to a lower caste, loves Kate and though she too likes him, she agrees for an arranged marriage with Garth for the sake of peace. Things, however, go out of hand when Kate and Humphrey are captured by park's rangers and sent to another park for re-population.

Aware of her duties, Kate is determined to return home and aided by two golf-playing geese, they try to make their way home.

The main drawback of the story is its lack of originality, even in rearranging cliche. Yet, the film will leave you with a good feeling in the end. The two golf-playing geese would etch themselves in the mind of the audience, just like some side characters in other animation films have endeared themselves to fans.

While the story lets down the audience, what does not is its animation that is spot on and therein lies a proud moment for the Indian animation industry. The look and the feel of the film have entirely been done by a team of Indian animators from Mumbai's Crest Animation Studios.

Hence, at the end of the film when the titles roll out, and along with it hundreds of Indian names, it is indeed a proud moment for the nation that is still stuck in mythology in its own homegrown animation films.

This is a moment of pride better than one person winning an Oscar, because it signifies global standards of the Indian animation industry, rather than excellence of just once person. It shows that India indeed has the skill and expertise, if only some producers would have the courage to back good stories and filmmakers. Hopefully, they will have the sense to select a better story.
Posted by Indiblogs at 10:36 AM