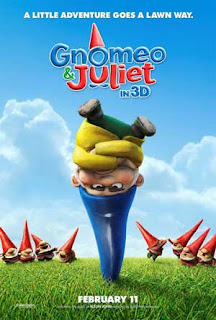 It is one of the most famous stories of all times, having been told in different forms and shapes through different times and cultures but with the same message of love over war.

The William Shakespeare version of star-crossed lovers destined for doom gets a modern, animated, 3D avatar and despite a well-known story, some cliches and a happy ending unlike the original, does manage to hold the fun quotient.

The Reds and Blues are two groups of gnomes living in neighbouring houses. For their owners, they are merely decorative pieces, but away from their eyes, they not only come to life, but are at war with each other. Much to their own chagrin Gnomeo, a blue and Juliet, a red, fall in love and aided by a plastic crane, secretly court each other. But can their love survive the hatred of their clans?

The two best things about this film are its immaculate animation and wit. To give garden gnomes the detailed expression would definitely have taken a lot of hard work. The wit and play on garden and gnomes is obvious from the name of the film but also delight in other places. Consider these: 'weapon of grass destruction' and ‘terrafirminator'.

The script of the film went through multiple hands, nine to be exact. And the result shows. Yet, there is something that seems to be missing in the film that could have lifted it from being just good to absolute greatness.

In terms of metaphor though, it's spot on. Would you let the hatred of others destroy your love? The little warring gnome world becomes an analogy for the world, where people find different ways and means to fight and destroy each other. Amidst this, the hope can be a simple love between two people. Unlike Shakespeare's original, this fragile love does win in the end and unite the clans.

The film will obviously delight kids, and with a little stretch of their imagination, adults are likely to enjoy it equally. The pun on cultural kitch and Elton John's music, lends additional charm to this ‘gnonderful' film.
Posted by Indiblogs at 11:56 AM