I Am Number Four Movie Review 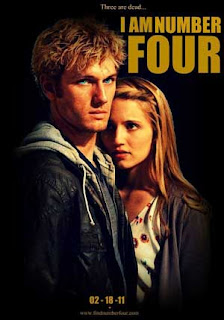 After the tremendous cinematic success of "Twilight", there was an opening for something similar in the science fiction space. Hence when a book was being written that brought the broody, angst-ridden teen who has to perennially keep running to the realm of science, the rights for the film were bought even before the book was out.

Number 4, played by Alex Pettyfer, is one of the nine living infants from the planet Lorien with special powers that are hunted by the Mogadorians, an evil specie that invade and absorb the resources of new worlds. He lives in hiding with his protector Henri (Timothy Olyphant) and keeps moving from one place to another to avoid detection, till in one place he falls in love with Sarah (Dianna Agron) and wants to stay and fight back practicing, and growing confident of, his telekinetic powers.

The film produced by Michael Bay and directed by D.J. Caruso has stamps of the Steven Speilberg school of filmmaking, where in the beginning everything is underplayed, and the mystery and the powers of the protagonist slowly unfold to a grand, violent finale full of special effects that blows the audience.

There is really nothing original in the film as it merely rearranges known situations and resolutions. Yet, linear, simple and cliched as it may be, it is done without being too in the face. Hence, there's a comfort of the familiar in the film for mass audiences. The discerning audiences can give it a convenient miss.

Though attempt has been made to make Number 4 silent and broody like Robert Pattinson from "Twilight", he is too hulky to be so. Also, in the rush to drive the chase story, there's little time to develop the love angle, something that we will obviously see in the next instalments.

For Indians, this is a special film as it is the first fully produced film by Reliance Big Entertainment in association with Spielberg's studio and thus marks Reliance's true global debut.

"I Am Number Four" represents the hurried rush for formulae that will work at the global stage, obvious from the fact that the rights to the book were brought by Dreamworks a year before the book was released and both the book and the film come barely six months of each other.

The result is the beginning of a new film franchisee. However, to retain audiences' attention, the filmmakers will have to do much better in every department of the film.
Posted by Indiblogs at 11:48 AM