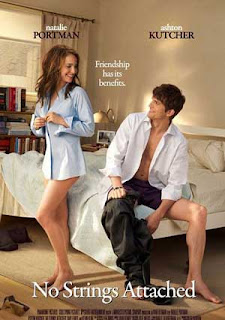 The world has gone through a drastic change in its value system. The way people look at love and relationships has undergone a sea-change. This thus must be exciting time for filmmakers as it provides them free and abundant material. Sadly, bound by certain notions of filmmaking, they mess it up. "No Strings Attached" is a perfect example of that.

Emma (Natalie Portman) is a modern woman to the extreme. She wants sex, but not a relationship. After all who has the time to go through the obvious pain that comes with it. And she makes it clear to Adam (Ashton Kutcher). But, we all know, that is simply not possible and Adam falls in love with Emma. The result is a break-up.

They say you can't have a rainbow without the rain. Relationships are pain but with the pain comes ecstasy. Anyone who has been in a relationship would know that there's no way to separate the two.

There was hence a great opportunity to explore modern notions of keeping the two separate by keeping sex and love apart. One has only to see the film to understand how easily that opportunity was lost in the melee of cliche. In the end, the film ends up being a shadow of the potential it demonstrated in an attempt to cash in on the coming romantic weekend.

The main weakness of the film is the script. First of all, the writers have messed up with the focus of the character. The film is told from the point of view of Adam, when it is clearly Emma who is different, unique and who has a problem. Even a little more detailing on explaining what gives Emma the idea she has might have drastically raised the quality of the film.

But quality is obviously not what the filmmakers had in mind. And that is a shame considering that Portman can indeed act and Kutcher can be prodded to do so. It is thus a waste of a good cast.

The film does have a few funny moments. The characterization of some side characters is really well done. Sadly, no amount of bricks in a building can help, if the foundation itself is weak.
Posted by Indiblogs at 11:06 AM