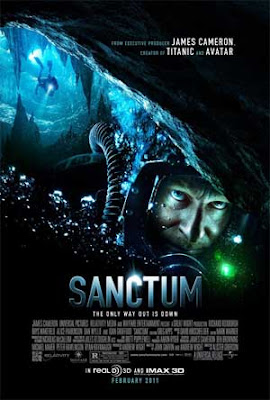 Somewhere at the middle of the film as the characters are fighting for survival, there's a line when one says, "For the cave, we are just passing dust." And that is indeed how it is for the world where humans, no matter how great we are, are merely passing dust and in the midst of this, all of us trying to find our sanctum sanctorum.

For Frank (Richard Roxburgh) this sanctum is the world's largest cave system in Papua New Guinea which is one of the last few unexplored places on earth. An intrepid, fearless and experienced explorer, he leads the team through the intricate cave structure with sternness. He is particularly harsh on his son Josh (Rhys Wakefield) and his team in equal measures in awe and dislike of him, with his son hating him.

Yet, when a storm blows through the cave and they are trapped inside, the only thing that stands between life and death for these five people is Frank. And the expedition of exploration becomes one of survival as man pits his wits against the fury of nature.

Produced by James Cameron, the most stunning thing about the film is its visuals. The tricky set and lighting is handled with adroitness in this Australian film.

"Sanctum" is a beautiful tribute to the spirit of adventure and discovery in humans. It pays homage to those men desirous to shine a light and to be at places where no human has gone before and the kind of hardships they encounter. And though sometimes it does get a little like a National Geographic documentary, the stunning visuals keep one on the edge.

It is also like a horror film where instead of a man stalking and killing a gang, it is nature's fury that does so. The casting is immaculate and Richard Roxburgh proves himself to be an actor of reckoning.

Based on the true story of co-writer Andrew Wight, Cameron fans will be delighted by another underwater film produced by the master who gave "The Abyss". It is an adrenalin rush for thrill seeking adventurous souls, but might get a little boring for others.
Posted by Indiblogs at 10:43 AM