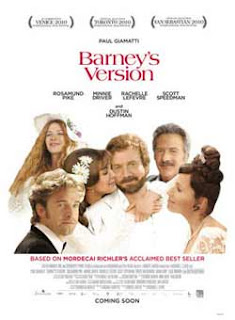 Unlike a comedy, or a rom-com, or a mystery, life is not one dimensional. Life, if you can describe it thus, is a mix of many cinematic genres. It is hence not surprising, that of late, there have been films that cannot be compartmentalised into any specific genre, but can be called 'mixed-genre' film. To experience first hand, and thus understand the potential of this 'new' genre, go watch "Barney's Version", a pinnacle in its own right.

"Barney's Version" traces the tragic, comic and mysterious life of Barney Panofsky (Paul Giamatti) - a politically incorrect, impulsive and irascible television producer owning 'Totally Unnecessary Productions' who goes through three marriages and one true love. As fate would have it, he finds the true love of his life on the day of his second marriage.

The woman - Miriam (Rosamund Pike) - is a guest at his second very Jewish wedding. He falls, irrevocably, irretrievably, irresistibly in love with this woman and chases her. But in the process, he becomes the prime accused in the murder of his best friend, Boogie (Scott Speedman). But would he get to keep the woman of his dreams?

There are so many things and aspects that the film handles, that it is impossible to categorise it into one straight jacket genre. It is one of the most original comedies in recent years. Yet, it is one of the cutest romantic films you'd have ever seen and has a murder mystery that baffles you till the very end.

There are many films that have been attempted like this, but none with the emotional and cinematic sweep of "Barney's Version". As a discerning audience, you are left with your jaw wide open wondering how virgin film director Richard J. Lewis, successfully manages so many spaces in the time span of less than two hours.

The film is also a connoisseur's delight as it is peppered with extraordinary performances from its leads and supporting cast. Paul Giammati is stellar in his portrayal of an ordinary man in perennial anguish over one thing or the other. Minnie Driver in a small role excels as a consistently henpecking wife. Rosamund Pike exudes sexuality and grace and Dustin Hoffman gets your laughing gases warmed up as the idiosyncratic, Jewish ex-cop, sidekick father of Barney.

The film has more genuine humour than seen in any film in recent years. And this has to do not just with the perfection of its actors, but the perfection of their timing with each other. And that has to do as much with their skills, as director Richard J. Lewis's apt handling of key moments.

Based on a popular novel by Mordecai Richler, it will make you wonder whether it is a comedy, or a romance or a who-done-it film. But you don't care. You don't even care about the little inconsistencies in the plot and some decisions made by the characters in the film. That is the sucking power of this totally necessary production.
Posted by Indiblogs at 11:33 AM