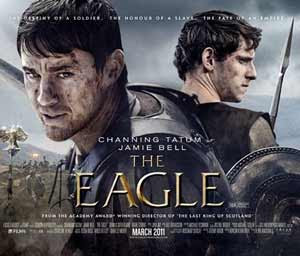 Films once pandered to the simplistic black and white notion where good battles bad, and nad loses in the end. Literature, even ancient ones, knew otherwise. Cinema, the youngest of the art mediums, has taken longer to tread these grey areas.

Yet, it is disconcerting to notice that popular cinema still continues on its simplistic trip, despite showing promises otherwise. The Eagle is one of the best examples of that.

Army General Marcus Aquila (Channing Tatum), during Roman civilization's golden age, is a progressive Roman by every standard. He leads from the front, is independent in thought and does not believe in the jingoistic politics of the time.

His only ambition in life is to get back "the Eagle", a standard made of gold that was the symbol of Rome.

His father, leading a charge of 5,000 men towards the northern territory, thought to be land of savage tribes, had lost "the Eagle" two decades back and had shamed the family.

After an honourable discharge due to an injury Marcus along with his slave Esca (Jamie Bell) tours the northern lands to get "the Eagle" and win the family honour back.

For a little while, it does seem that the Eagle will transcend its boundaries and address the grey areas to which the world and its morality belong and give a view from the other side of the fence.

In the northern region, far from civilisation, Marcus is taken slave by his slave Esca, and experiences first hand the humiliation of being one.

Here, and in many other parts, the film by being sympathetic towards those who are thought of as savagess could have attacked the notions of right and wrong and might being right.

However, it lacks imagination or political de rigeur, and sticks instead to typical Hollywood "apartheid" - thus making it average and a politically very wrong film.

Politically put in today's context, the film justifies the superiority of the western world over the eastern one. By its logic, every American and European invasion is justified. Be it the occupation of America by the Europeans beginning 1492 or European conquests of the world later, or America's various wars, including Vietnam and Iraq.

The film thus treads on a dangerous ground politically and its morality is of a propaganda film as it puts the sole onus on determining right and wrong on the mighty west.

And that is indeed a great loss, considering the ensemble of actors, technicians and the scope that was possible from the film.

That said, the film has cinematography to boot, and the performances leave nothing much to complain about, especially star Jamie Bell as the loyal slave and sidekick.

The Billy Elliot kid has grown up, sadly not the film.
Posted by Indiblogs at 11:36 AM