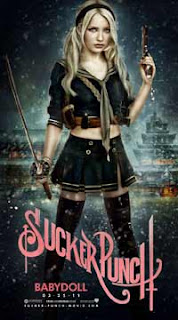 Hollywood's "300" film poster boy Zack Snyder needs "Watchmen" as he has developed a strange problem. Like a bad boy, he has been spending too much time playing video games. In "Sucker Punch", he sacrifices good storytelling and filmmaking for video gamey special effects. Somewhere in the film he forgets that he is a director, and not an effects supervisor.

It is hard to tell the story of "Sucker Punch", not because it transcends a conventional story, rather because it does not really have a story to tell.

A girl (Emily Browning) is sent to a mental asylum by an evil stepfather after she accidentally shoots her younger sister while trying to protect her. Her memory is scheduled to be erased, but before that she delves two layers deep into her mind in an attempt to free herself and a few other girls.

The film opens beautifully with a five minute montage that promises an entertaining, comic book touch to the film. Sadly, it's a no-go zone beyond this point as "Sucker Punch" becomes a video games meet "Inception" and "Inglourious Basterds" with women in the lead.

The problem is that Zack Snyder, who surpassed existing limits of special effects with "300" and "Watchmen", forgets that the two films had a beautiful story to back up the effects. That works. But if one expects excellent special effects to back up a non- existent story, you get punched for being a sucker.

Despite some commendable soundtrack to hoot, it is mostly loud enough to irritate and the filmmaking seems crass and the product of a juvenile mind. The only positive would be for serious video game buffs, who would identify sections of the films with their favourite games.

The girls in the film have one job - to look vulnerable and lethal at the same time and they do this convincingly. However, Oscar Isaac, as the evil guy who runs the place, proves himself to be an actor in the reckoning.

Despite these, the film runs on empty. How Zack Snyder manages this, perhaps requires as much genius as making a "300" or his highly underrated masterpiece "Watchmen". Perhaps Zack, who wrote the story, should not try to film his own stories but visually interpret others with his evident genius for doing so.
Posted by Indiblogs at 11:38 AM