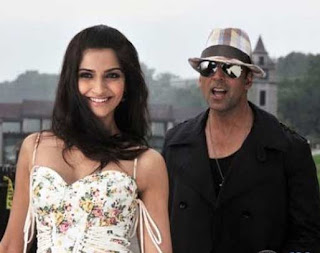 Film: "Thank You"; Starring: Akshay Kumar, Sonam Kapoor, Bobby Deol, Irrfan Khan, Rimi Sen, Suniel Shetty, Celina Jaitley; Directed by: Anees Bazmi; Rating: ***Bow to the wow. Men, we are told, are dogs. They cheat on their wives. And have themselves the time of their lives. And the wives, poor creatures, are so devoted to their spouses they observe the Karva Chauth for their pati-devils even when they have no reason to do so. Such devotion in show motion.

"Thank You" is a kind of backhanded ode to the classic Indian wife we grew up watching in the films where the resplendent Nutan would sing "Tumhi mere mandir tumhi mere pooja" to her smug husband.

Since this is a film about the perils of skirt-chasing there are plenty of women of all shapes and sizes in skirts (including Sonam Kapoor whose dress code defies all analysis) and other designer clothes.

For that talented writer Anees Bazmi the theme of infidelity in "Thank You" is familiar territory. In the past he has done jokey takes on men who can't keep their libido down with varying degrees of humour. A certain higher level of intelligence is perceptible in the way the characters are put out for scrutiny in the light of their unfaithful characters.

Irrfan Khan as the sarcastic bully of a husband scores the highest marks in the acting department. His wry caustic responses to semi-petrified wife Rimi Sen make a mocking mark mainly for the way the lines are written and delivered. Irrfan is priceless in projecting parody. Rimi Sen, an underrated actress, provides Irrfan valuable support.

Akshay Kumar plays the pied piper of the libido. He tries to teach the three womanizers how to check their carnal instincts. That is the best joke in the film. Such self-righteous cool roles of the social reformer are not new to Akshay. He delivers a rousing monologue at the end on the virtues of fidelity. While his comic timing remains sharp and spot-on it is the way he tries to create an aura of suspense about his character's motives as a man on a mission, that provides a cutting edge to the tale of three skirt-chasers.

Remarkably the dialogues remain free of innuendos. Surprising, considering how lurid films about infidelity have gotten in the past. The proceedings adhere to a sense of fun without getting cheesy. Suneil Shetty's body language and comic timing in some sequences show his coming of age as an actor of mirthful value.

"Thank You" has moments that come close to illuminating the underbelly of infidelity. But fearful of forsaking the mood of a riotous farce writer-director Anees Bazmi pulls out of any serious statement to lounge languidly in his comfort zone. As far as masala comedies go "Thank You" gets by on the strength of some smart writing, sassy dialogues and of course a handful of performers who try to balance out the lacklustre performances of other actors who, lethally for a comedy, just don't get it.
Posted by Indiblogs at 10:38 AM