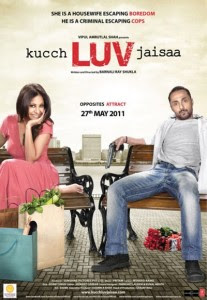 On paper, this must have sounded like a terrific idea -- to showcase the amazing talents of Shefali Shah, who plays a disenchanted housewife whose husband has forgotten her identity, not to forget her birthday.

She sets off on a day of adventure with a mysterious stranger, and discovers reasons to love herself. Wish we could love her as much as we want to. Wish we could share her zest to seize the day. The storytelling, sad to say, distances us from the housewife's zany confusions.

The idea of a woman's 24-hour journey into self-discovery needed more careful packaging and a mastery over the emotions that she has to pour out into the script to give the sensitivity that it aspires to achieve.

While Barnali Ray Shukla's writing sparkles, she is unable to put the situations on film in that inviting spiral of compelling situations that would make the housewife's predicament endearing and empathetic.

Once we get over the initial excitement of watching the housewife overcome her initial boredom, the narrative pretty much settles down to letting the protagonist find her own centre in a story that doesn't quite know how to get going. The narration moves forward in fits and starts.

Some episodes hold our attention for the effervescence that Shefali Shah brings into them. Here's an actress who is always in command of the material provided to her. Often we have seen Shefali go beyond the requirements of the script.

However, that isn't a luxury afforded to this consummate actress on this occasion, as we see her struggling with dialogues and scenes that seem to have been written with much warmth but little conviction.

What sees the film through is the intelligent camaraderie that Rahul Bose establishes with his co-star. This a road movie with the traffic in a state of chaos. We know the neglected housewife Madhu is out for a day of defiant adventure in the company of a sullen gangster who has just been betrayed by his girlfriend. Beyond that, we aren't really allowed to care for the two misfits.

By the time the two unlikely companions reach their destination, the plot has reached a dead end. Ironically, the film's best sequences comes towards the end. It's a stolen moment between the mother and her rebellious teenaged daughter in the rest-room where the older woman wants to know if her daughter has ever had sex.

This is the only time this sex comedy mentions the 's' word.

"Kucch Luv Jaisa" is a dissatisfying film about a dissatisfied life. It is littered with situations that had the potential to ignite into furious displays of intuitive intimacy. The moments are mostly squandered in trying to appear sassy, stylish and savvy.

A bit more of sincerity and intimacy would have gone a long way into making this film on unrealised dreams blossom into a work of ambrosial possibilities.

The pretentious songs on the soundtrack serve as a reminder of how much this film craved for more occasion to cheer the housewife's efforts to rise above her deadlocked existence.

Shefali takes the character as far as it can go. Beyond a point, there is little she can do with a script that doesn't quite find its centre.
Posted by Indiblogs at 10:03 AM