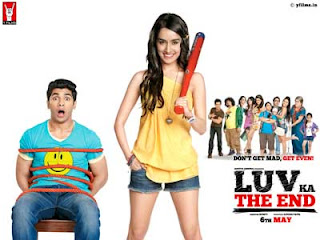 New Delhi, May 4 (IANS) Director Vikram Bhatt is back with what he is best at - spooking people. But this time the director takes his fascination to next level by making his new film "Haunted" in the 3D format, which releases Friday alongside teenage romance "Luv Ka The End".

Bhatt, who has previously directed horror flicks like "Raaz", "1920" and "Shaapit", claims this is his "most expensive and ambitious project till date". It is shot in 3D format like "Avatar" and not converted from 2D to 3D format.

In the film, the protagonist Rehan (Mahakshay) visits Glen Manor to finalise the sale of the house, which his father had initiated. But during the proceedings Rehan discovers some mysterious incidents in the manor that may jeopardize the sale.

And when he investigates the inexplicable happenings, he comes across a girl and falls in love with her. This discovery brings him face to face with the biggest challenge of his life, how to save the girl when she is already dead.

The director roped in 3D technicians and supports from Canada who have earlier worked in the genre - Brent Robinson, Christan Jeams and Cassidey Micheal Reuben Flax.

Mahakshay is hoping to get a second chance in Bollywood with "Haunted" after making his debut with box-office dud "Jimmy". He will be seen performing risky stunts in the film.

This is the first big screen outing of debutant Tia Bajpai, one of the finalists in singing reality show "Sa Re Ga Ma Pa".

Model-actress Shenaz Treasurywala has written the dialogues and screenplay of "Luv Ka The End", which tracks the story of Rhea (Shraddha), the quintessential girl next door. She is in love with the most popular boy in college Luv (Tahaa).

On the eve of her 18th birthday, they plan to take their relationship to next level, when she accidentally finds out that Luv is not as nice a guy as she thought.
Posted by Indiblogs at 10:40 AM