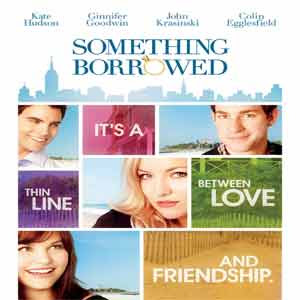 Romantic triangles are nothing new. Triangle between three close and long associated friends is also nothing new. What could have been new are the push and pulls and the situations that arise out of such liaisons. And though "Something Borrowed" does have its moments, overall it fails to hold as a totally fresh film.

Good girl Rachel's (Ginnifer Goodwin) best friend is the cheerful but obnoxious Darcy (Kate Hudson) and she to her is 'the sister she never had and a mother she needed'.

On her 30th birthday, after a drinking binge, Rachel sleeps with Dex (Colin Egglesfield), who she has had a crush on since college.

The only problem is that Dex is Darcy's fiance and now Rachel and Dex realize they have always been in love. Complications arise from their guilt and jealousies that threaten the three relationships.

There are some very tender moments handled well and some genuine laughs in the movie. Also a few side characters, especially the one of Ethan played by John Krasinski is a delight.

However, these genuine moments are too far between for the film to rise beyond the limits it sets itself and it fails the cut on two counts - of becoming a popular rom-com or in highlighting the issues in such a liaisons in a more serious manner.

What we have then is a film that is in between, and that is perhaps its greatest drawback.

In the revelation of secrets in the end, the film does attempt a serious ending like Mike Leigh's masterpiece "Secrets and Lies", yet it is too haphazard for it to be taken with the seriousness that the explosive revelations deserve.

Kate Hudson is exceptionally good in her portrayal of a vivacious, but pea-brained Darcy who's always looking out to have her fun. John Karsinski plays the perennially dark humoured Ethan, Darcy's opposite with revelatory elan. However, it is the script that lets the film down and you cannot help but wonder about the masterpiece that lay hidden behind the veneer of what you see.

On the whole, this hard-to-like but not-difficult-to-pass film, based on a novel of the same name by Emily Giffin, wastes a good opportunity and some good acting performances.
Posted by Indiblogs at 10:07 AM