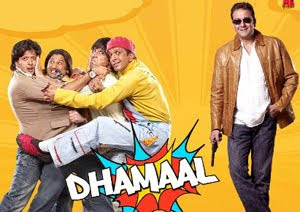 New Delhi, June 20 (IANS) After having the audience in splits with his 2007 hit film "Dhamaal", the comical fivesome of Riteish Deshmukh, Jaaved Jaffery, Arshad Warsi, Ashish Chaudhary and Sanjay Dutt are returning with a double dose of entertainment in the sequel "Double Dhamaal", releasing Friday.

Directed by Indra Kumar, the movie, co-produced by Reliance Entertainment and Maruti International, has new additions to the cast - Kangana Ranaut and Mallika Sherawat.

The story of "Double Dhamaal" starts where it ended in "Dhamaal", when they donate all the money that they had acquired. The four good for nothing jokers -- Roy (Riteish ), Manav (Jaaved), Adi (Arshad) and Boman (Aashish Chowdhary) -- still dream of a good life where they would get everything without doing anything.

Enter their old arch-nemesis and corrupt inspector Kabir (Sanjay), who is no longer a cop and is now leading a luxurious life. He drives a Mercedes, has a posh office and lives in a villa. After seeing all the comfort and luxury in Kabir's life, Roy, Manav, Adi and Boman feel jealous and decide come what may, they will share his fortune.

However, they are unaware that their quest to turn their dreams into a reality would become a nightmare as Kabir has his own agenda, only shared by his wife Kamini (Mallika Sherawat) and his sister Kiya (Kangana Ranaut).

Made at a budget of Rs.35 crore, the film has been shot in Mauritius, Hong Kong and Mumbai and promises to be a rib-tickling comedy. Another highlight of the movie is that after "Munni" and "Sheila", sultry Mallika will be seen giving competition to Malaika Arora Khan and Katrina Kaif as Jalebi Bai with her item song.

The makers have also bought the rights of the hit song of "Oye Oye" from the 1989 action film "Tridev" and remixed it to suit the GenNext audience. The music of the film is given by composer Anand Raj Anand.

The other highlight of the film is said to be Ashish, who dons the garb of a woman and even learnt how to behave like one for the role. And it was Riteish, who demonstrated catwalk skills to Ashish and gave him a lot of tips which helped in his performance. Riteish had played a woman in "Apna Sapna Money Money".

Ashish will show his 'adaas' and 'nakhras' as a girl while seducing Sanjay in the movie.

The shooting of the film, however, proved to be quite painful for Jaaved as he fractured his leg on the sets and had to be admitted to a hospital. As a result the director had to alter the final scene of the film.

The film is set for a worldwide premiere at the International Indian Film Academy (IIFA) awards function to be held next week in Toronto.

Whether the sequel will be able to repeat the success of the 2007 film "Dhamaal" is yet to be seen.
Posted by Indiblogs at 9:23 AM