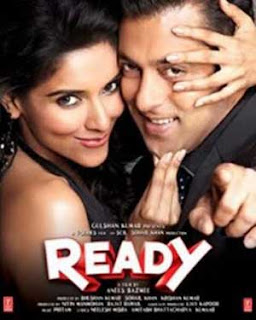 She's a runaway bride. He's a runaway rogue, a little rough around the edges but a good hearted lovable soul. Salman Khan can play this character over and over again with his eyes closed. In "Ready" he is back to playing the lover-boy clown.

"Mr. Fix-it" and "Ms Hum Apke Hain Conwoman" flirt and get naughty in exotic locations. They don't generate chemistry. They are just being around.

Jeez, these two never tire of saying cheese! And when the going gets cheesy there's always the family to fall back on. There are three families, living in homes that appear to have been built to accommodate over-sized families. The setting is almost laughably anachronistic.

Salman Khan and his director Anees Bazmi pay a hefty comic homage to "Hum Aapke Hain Koun". The Salman-Asin romance unfolds against the backdrop of a commodious joint family where every family-member seems determined to have a good time even at the expense of good taste.

True, Asin lacks the gamine charm of Madhuri Dixit. But then the Salman Khan in "Ready" is not quite the Salman Khan from "Hum Aaapke Hain Koun". He hasn't aged. He's just become more smug and self-confident. Many times we catch him looking bored on camera. But that is this iconic star's style statement.

When you are Salman Khan you can slip out of a character when you want. No one is complaining.

Bazmi's script, a shoot off of a Telugu hit, accommodates more characters than Goa during the tourist season.

Every character is over-dressed and over-the-top. Then men are constantly looking for reasons to say goofy corny things to one another. That's the required mood of this "panga-'mirth'-lena" comedy with an attitude that stretches from one end of the lengthy narration to the other with hardly a break for the plot to gather together its thoughts.

Bazmi keeps the proceedings neatly on the side of good taste. Innuendos are avoided, and partly so because Salman has an image of the good-bad boy. He never offends refined sensibilities with his wildly bratty antics, though he never shows any inclination to be one of those refined types himself.

He is happy being human in a way only Salman Khan can be. He gets able support from some solid performers like Akhilendra Mishra, Sharad Saxena, Manoj Pahwa, television comedian Sudesh Lehri and Mahesh Manjrekar whose hilarious act as Salman's dad is lifted from Sanjay Chhel's "Khubsoorat".

Strangely the women performers are all vapid to the point of seeming sedated. This is a men's comedy with women welcome to join the fun.

But nobody minds. And not because this is a mindless comedy. The quality of the gags is often higher than what we usually get in Bollywood comedies. But the film suffers from an overloaded narration.

There is too much effort to cram in "entertainment" at every possible level. There is also a rather lame attempt to define the status of women in feudal households. But the attempt is so hurried and cursory, it's almost farcical.

Replete with tongue-in-cheek references to many earlier blockbusters including Sooraj Barjatya's "Hum Aapke Hain Koun", "Ready" is like one of those familiar tunes sung to a new set of lyrics that you may not approve of but you empathize with because it offers the comfort of the familiar.

Having said that, the film, it must be confessed, doesn't really offer even diehard Salman fans the fun-quotient expected from the mega-star. Too many people colonise this domestic comedy. Boisterous uncles, over-dressed aunties, under-intellectualised gangsters and irksome henchmen are all greedy to be noticed. The trouble is, they aren't doing anything that is terribly exciting or engaging, except playing the foil to the star of the show.
Posted by Indiblogs at 5:32 PM