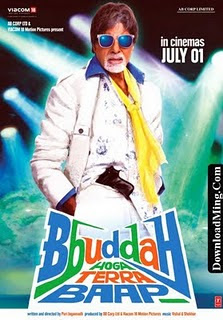 Folklore has it that wherever the Big B stands, the queue begins. It's time to queue up for a film that reads like a running commentary on the Bachchan legend. Blessed are the generations that get to see India's most iconic and enduring screen-hero play a variation on all his most cherished roles.

And then some more. To the angry Vijay persona that the Big B created through those brilliantly-written films of Salim-Javed in the 1970 and 80s, the actor still sprightly enough to make all the bachcha-log of Bollywood look like performing midgets, adds dollops of wry cynicism that goes well with our times.

Make no mistake Telugu cinema's most successful director Puri Jagannath is not just a Bachchan fan. He's also a master storyteller. To the mix 'n' match tale of an Angry Young Man's journey into his advancing years of unrelenting lividness and self-mockery, Puri brings a crackling contemporary commitment to telling a story that has no room for humbug…only space for hectic hijinks.

Written with supersonic dexterity, the screenplay races through numbered days in the life of a Paris-returned gangster who is called back to Mumbai by a gangster with a serious concentration problem (Prakash Raj) to finish off a particularly troublesome cop(Sonu Sood).

It's a skilfully written yarn that doesn't stray into the yawn zone for even a second. Every character, even the relatively minor ones like the Bachchan's landlady who keeps jabbering to an unseen husband in Dubai, adds a sheen of zing to the shindig. Though the narration seems to leap before it looks, the director actually manages to create a controlled atmosphere of plot development within the chaos of Mumbai's streets clogged with scampering gangsters, cops and their minions.

Jagannath Puri displays a fabulous flair for the funny and the ferocious. The comic scenes contour the mega-star's proclivity to laugh at himself and the self-important world around him comprising gangsters, collegians, cops and other on-the-move urbanites. Vishal-Shekhar's austerely-used music creates evolved rhythms for the Bachchan persona. You can't miss the insistent beat.

As for the action, the camera (Amol Rathod) moves to the rhythm of the Big B's super-controlled body language creating for the assorted villains a kind of disembodied dynamism that we see in a far cruder avatar in the South, in the cinema of Rajnikanth.

Here, it is the Big B at work. And boy, that does mean something, doesn't it! The iconic super-hero maneouvres through his tailormade role with a devastating dexterity, creating a celluloid combustion that leaves a trail of smoking guns, screaming tyres and satiated expectations that audiences felt and experienced in the heydays of the Bachchan Raj.

The reign never ends…thank God for small mercies! "Buddah…Hoga Tera Baap" offers a pleasurable romp into the star-power of the Big B. The rapport that his character builds up through some lovely actresses of several generations (Hema Malini, Raveena Tandon, Sonal Chauhan, Charmee) is so bloody robust and funny, you are left wondering how much of the sly subtle foxy flirtatiousness comes from the star and how much of it was there in the screenplay.

Undoubtedly well-written and directed with sure-handedness that cannot hide Puri Jagannath's boundless admiration for the Bachchan phenomenon, "Bbuddah…Hoga Tera Baap" is one of those garam-masala products that's far clever than the outward flamboyance of the main character and execution suggest.

Cut through the blizzard of bravura that the Big B projects so insouciantly and at heart this is an emotional father-son story. See how cleverly the director moves from a kind of italicized derringdo to a clamped emotional finale…. See how skilfully the other actors support the Big B's towering presence. Prakash Raj as the arch-villain brings a sense of madness to the proceedings while Makarand Deshpande as a quiet gangster is a glorious foil to the Big B's repartees and rejoinders. Sonu Sood as the cop who keeps running into the old-young super-hero manages to hold his own in front of the Big B. And Raveena as the Big B's besotted bombshell beloved from the past has herself a blast.

So do we. Right to the last frenetic shootout, we are with the director laughing cheering and saluting the star-power of this super-phenomenon named Amitabh Bachchan.

And when the Big B does a medley of all his old songs it's time to forget that the Bbuddah has just become a grand-baap all over again. Just get up and dance to the rhythm of the Big B's star power. Don't waste time watching the smut. "Bbuddah…Hoga Tera Baap" is the past present and future of mainstream entertainment.
Posted by Indiblogs at 9:36 AM