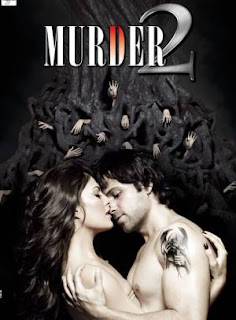 The sequel to "Murder" is nothing like the first part of the frenetic franchise. And Jacqueline Fernandez who has been built up in "Murder 2" as the next Mallika Sherawat is nothing like the overrated Mallika….Thank God for that! Fernandez exudes an unbridled sunniness even when pouting in the bare minimum. Alas, she doesn't have much to do in "Murder 2" except swathe the dark drama in a spot of sunshine.

God knows this film about the devil-unleashed, surprisingly written by a woman (Shagufta Rafique) needs that little of sunshine. It is a desperately dark film. The characters are wretchedly unhappy. No matter which side of the moral line they are positioned they are standing screaming into the abyss that is suburban life. These people need serious help.

This then, is the world Mahesh Bhatt has bequeathed to us. Take it and bleed it.

Director Mohit Suri who earlier took us on a jolting trip through the world of prostitution, pimps and desperate cops in "Kalyug" takes the same route again. On this occasion the journey is far more ruthless and rigorously implemented to create horror repugnance and hatred for a word that we've created for coming generations.

In the typical Mahesh Bhatt style "Murder 2" doesn't waste time in back-projections and story build-up. He goes straight for the kill. With trenchant immediacy director Mohit Suri (back in "Kalyug" form after the misfire that was his last film "Crook") tells us the story of a psychopathic killer who kills prostitutes with the pleasure that makes your stomach churn and look anxiously towards the future about your daughter who is just stepping into the big wide world.

Who knows if the man sitting next to her in the movie theatre is a closet-nutcase with a collection of hacksaws in his house, and not to carve up the Christmas turkey.

Prashant Narayanan as the psychopath plays the character at such an even pitch he makes your blood freeze in fear and revulsion. Here's a man who could be that ghoul who butchered all those kids in the Nethra killings and then ate them up without a burp.

The 'hero' in "Murder 2" is a burn-out suspended cop who makes money out of criminals, stays sullen and haunted throughout the film except when he goes for the kiss, and offers his girlfriend a wad of notes after making love. To buy the fridge, he says. Naturally the lady freezes.

Force of habit, we say. Hashmi has done this kind of a role repeatedly. The kissing and vigorous bedroom activities are quickly taken care of in the first 15 minutes. Wouldn't want the lovers of the serial kisser to feel they're being cheated in favour of the serial killer.

The wacked-out killer in "Murder 2" doesn't eat his victims. He just cuts them down to sighs…and groans and shrieks of pain and records their dying voices to get his rockers off….

The plot seems original. The narration is clenched and the characters driven by a desperate urge to assert themselves before death rings their doorbell.

The savagery with which the college-going call girl (Sulagna Panigrahi) is brought to her gruesome death becomes a metaphor for the loss of innocence and the triumph of diabolism that is often garbed in designer labels these days.

"Murder 2" is not a pleasant film to view. The psychopath's killings are done in graphic detail. The storytelling offers no respite from the brutality. Most of the time we are looking at happenings that we would rather not see. But see, we must.

"Murder 2" is a mirror of our amoral venomous times when no relationship is sacred anymore. Mohit Suri remains in command of the murky material and traumatized characters. While most episodes hold together in a riveting rhythm of life's most unsavoury truths, the sequences featuring Prashant Naraynan work better than the rest of the film. He lends the proceedings a credibility that is unsettling.
Posted by Indiblogs at 10:50 AM